Artavasdus (Artavasdes) was the governor of the Theme Armeniakon- (the Themes were “states” or territories within the vast Byzantium Empire which were overseen by governors – usually of the same ethnic majority make up.)

He had conspired with Leo III to depose of the emperor Theodosius III. In return he married Leo’s daughter Anna and also became governor of Opsikion Theme. After Leo’s death he attacked his brother-in-law Constantinus V while the latter was on the way to battle the Arabs in the East. Constantius had to flee and Artavasdus marched into Constantinople to much acclaim. He immediately revoked the iconoclast decrees.

Being against Iconoclasts means you did not want images of Saints, Christ etc.. depicted. These images were considered a breaking of the commandment to not make any graven images and were considered Idol worship. Also showing Christ as a man, seemed to support his human nature against his Godly nature- thus promoting a heretical view. As with all art, much is left to the viewer and since the people in charge could not control the Esthetic experience of their subjects, they chose to remove all images. Emperor Artavasdes was in that camp- Constantinus V was for Iconoclasts. Some blamed the losses to the Moslems on the use of images of Christ and thus losing God’s favor.

By revoking the Iconoclasts decrees, Artavsdus gained much popularity, especially in the West. Constantinus V, however, gained support and forces in the provinces and in two battles defeated Artavasdus, as well as his son Niketas.  Upon entering into Constantinople he had Artavasdus and his sons apprehended and publicly blinded. 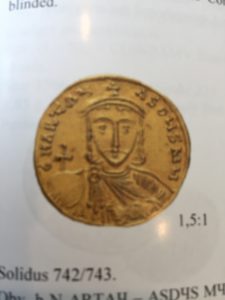 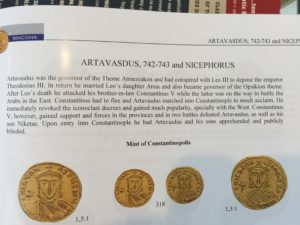 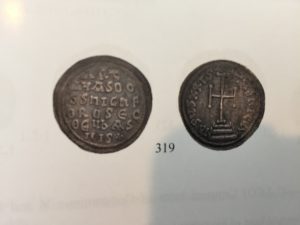 The Rarest of the miliarensia series offered at the starting bid of $2200.    Click on images for close ups