As one of the Bronze Age tribes that eventually became the Armenians, the nation of Urartu lives on in recorded history as an enemy of the Neo-Assyrian Empire (911-609 BC), and is named as one of the many nations that Assyrian kings such as Sargon II and Ashurbanipal attacked in their campaigns to conquer the known world.

While not a lot has survived about the Urartu we do know that their supreme god, Khaldi, was a god of war—not an unusual choice for a Bronze Age power that constantly found itself defending its mountain valleys and capital on Lake Van from the power- and resource-hungry Assyrians. It also makes sense, then, that these two weapons would be a part of that legacy. 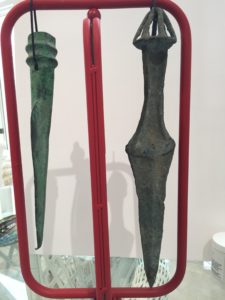 This bronze spearhead (left) and dagger (right), found in the Lchashen region of Lake Sevan, are dated to the 15th century BC. 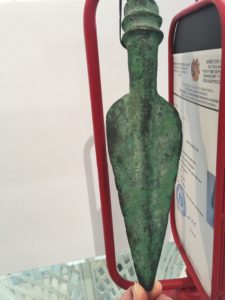 The bronze spearhead is 11 inches (28cm) long and has a bent tip (seen above)—bent against an enemy bone? 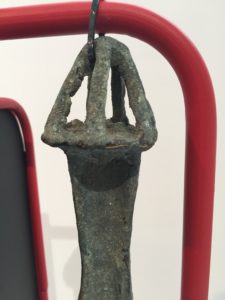 The bronze ritual dagger is 15 inches (37cm) long and 7 cm wide at the widest part. The Dagger has notches where a wood applique could have been in place. Also, with the open end on the handle, a leather strap could have been placed through it.

While the dating  is during an era before the Urartians pop-up in the Assyrian annals, it still comes from an area in Armenian known to be rich in Urartian sites: Erebuni, Karmir Blur, etc. And while it might not line up with the Urartu-Assyrian War, the dating does line up with the traditional dating for when Moses received the Ten Commandments.

The Pazyryk Carpet – Revisiting an Armenian Carpet from 550 BC