The History Museum of Armenia is proud to present the long-expected book by Hasmik Hovhannisyan, a specialist in Byzantine coinage at the Numismatic Department of the HMA, representing the third volume in the series Sylloge Nummorum Byzantinorum Armenia. The catalogue is edited by Dr. Ruben Vardanyan, the head of the Numismatic Department of the HMA.

The present volume was published at the very end of 2016 and dealt with the study and description of some 1200 Byzantine Anonymous Folles of Class A (969-1025). The Byzantine collection of the HMA has not been studied and published until recently. The majority of coins were found on the territories of the Republic of Armenia and historical Armenia. The largest group of the folles are derived from the archaeological excavations at Ani led by Nicholas Marr, implemented at the turn of the 19th to 20th century. 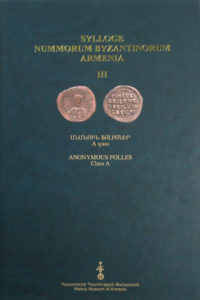 The book can be purchased at the book store located in the building of the History Museum of Armenia as well as at the Online Shop of HMA, or via online book stores in Internet.