In January 2015, on the eve of the centenary of the Armenian Genocide, I stumbled on eBay a tin badge inscribed “Servia Syria Armenia”. This chance discovery led me to write an article on this badge at the time of the centenary commemorations. 1 Since then I have been encouraged to write another, more detailed article. My research reveals interesting aspects about the circumstances in Melbourne, Australia at the time and expands our knowledge on this fascinating badge.

Image 1: Artwork for one of the badge designs registered with the Copyright Office (29 Nov 1917)

Badges like these also referred to as “tinnies”, pins or pin-backs and were commonly referred to as buttons and were issued across Australia since 1915 to help raise funds on “button days” organized by the Commonwealth Button Fund (CBF). 2 To trace the story on how this badge came to light we need to firstly understand the circumstances prevailing at the time and specifically the fate of the Armenian people.

During WWI, the Turks commenced a deliberate policy of persecution followed by massacres and by the close of 1915 two thirds of the Armenian population of over 2 million souls had perished by massacre or been deported from their homes. 3 News of these atrocities affected the Australian public to such an extent that the Armenian Relief Fund was established in December 1915 to raise funds for the starving and homeless Armenians. 4 At around this time the Victorian Friends of Armenia (VFA) was formed as a group of various church and civic leaders that had links via the British relief efforts to American missionaries in Armenia. 5

In early 1917 the VFA appealed to the Australian public for urgent needs and met with the Lord Mayor of Melbourne, Sir David Hennessy, and the CBF executives on 13 March 1917 to request a button day to collect funds for the unfortunate people of Armenia. The VFA pointed out that hundreds of thousands were dying of starvation while at the same time 140,000 Armenians were fighting with the Allied countries. At the same meeting Mr Haroutiun Balakian, member of the VFA who had come to Australia in 1897, appealed to the Australian churches to follow the American churches and hold a special Sunday for the Armenian people. 3, 6

With all the lobbying and fervour the Lord Mayor of Melbourne in response to the VFA appeal  took up the initiative by convening a meeting of the Council of Churches of Victoria in the Town Hall where it was agreed to designate 22 April 1917 as ”Armenia Sunday”. 7 With the success of the “Armenia Sunday” and to maintain public interest the VFA sought permission to the State War Council (SWC) to hold a button day. 8, 9 During this time in addition to the plight of the Armenians the Australian public were similarly made aware of the fate of the Serbian and Syrian nations.

At the meeting of the CBF on 15 October it was decided the next button day would be held on December 7 and collections made would be equally shared by these three relief funds. 10 At the SWC meeting on 14 November the CBF reported that the day would be referred to as “Suffering Nations” button day. 11 Public announcement of the Button Day was made by the Lord Mayor of Melbourne, Frank Stapley when he wrote to several Melbourne newspapers appealing for urgent funds to the citizens of Melbourne. 12

We are fortunate that the Suffering Nations button day was well documented across the Melbourne newspapers providing us a good insight on the day’s proceedings and vital information on the “Suffering Nations” badges. Surprisingly, there were indeed four different badges in two separate designs. 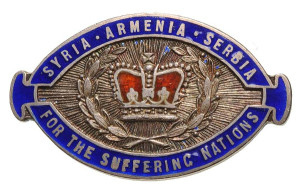 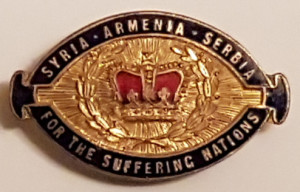 The first design with the words “Servia Syria Armenia” showing camels crossing the desert with Eastern buildings in the background was registered for artistic copyright by Mrs Frances Woolcott, honourable organiser of the CBF, on 29 November 1917 with the Attorney General’s Department, Copyright Office. 13 (Image 1). This design was used on the round buttons which came in 22mm and 32mm sizes. The word “Copyright” was inscribed on the bottom edge of the small badge only. These two badges were sold for 1/- (one shilling) and 2/6 (two shillings and sixpence) respectively according to size. 14,15,16 (Image 2 & 3).

There are two types of the small round tin badge “Servia Syria Armenia” in existence. One theory is that the less common open-back variety was made to replenish stocks especially given the “Suffering Nations” appeal lasted several weeks across regional Victoria. (Image 4) The image portrayed on the round badge is a mystery as there was no depiction of the anguish and horror of the region at the time instead perhaps the designer deliberately wanted to portray a scene of tranquillity and peace rather than the sad truth.

The other design was made in both brass and sterling silver and inscribed “Syria Armenia Serbia For The Suffering Nations” in enamel with Victoria’s state emblem, the crown of St.Edward, surrounded by a laurel wreath in the centre. The brass version was sold for 10/6 (ten shillings & sixpence) while the silver version was sold for £1 (one pound). 14,15,16 The silver variety is inscribed “STG.SIL” on the reverse while the brass badge has no reverse inscription. It is also interesting that these badges were inscribed with the name Serbia whereas the round tin badges was inscribed Servia being the historical English word for Serbia. (Image 5 & 6)

The weather for the Suffering Nations Button Day was perfect with the city dressed in red, yellow and blue bunting fluttering above the traffic with four music bands playing in the streets. 17, 18, 19 There were six stalls across the city decorated with Christmas stockings, flags and balloons selling cut flowers, fancy foods, produce, cakes and strawberries. (Image 7) Several hundred women and girls sold badges amongst the people with the highest collector from each of the six sections presented with the sterling silver badge for their contribution efforts. 20 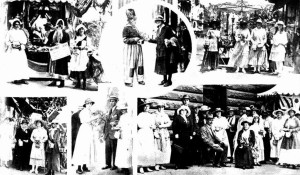 Relief efforts for Armenia continued in Australia when on the 28th December, the Governor General of Australia was advised by telegram from the Lord Mayor’s Armenian Fund Committee in London to jointly designate 3rd February 1918 as “Armenia Day” across the British Empire. 21, 22 Similar appeals continued for several years to come, in fact it was noted in The Age in the ‘News of the Day’ that “Armenia Sunday” had been recognized annually since the start of the war reflecting how entrenched the public were towards the relief for Armenia. 23

Amazingly, after my article in April 2015, the badge again was brought back to life in December 2015 when Armenia issued a souvenir stamp sheet depicting the “Suffering Nations” small round badge following the recommendation from Mr Hayk Demoyan, Director of Armenian Genocide Museum & Institute in Yerevan, Armenia and member of the Board which decides on annual releases of Armenian stamps. (Image 8).

For collectors and historians, this paper has revealed that there were four badges in two distinct designs issued on 7 December 1917 on “Suffering Nations Button Day”.  There is some conjecture amongst collectors that the oval metal badges originated from England. This is a misconception as the crown on the badge represents the State of Victoria and not England. In terms of rarity, the closed-back variety of the small round badge is the most common and often sighted on eBay, all the other varieties are very rare.

Today, after almost 100 years these surviving badges issued on “Suffering Nations Button Day” on December 7 1917 are not only evidence of the huge groundswell of public support and financial assistance but also testimony to the truth and reality of the Armenian Genocide. The in-depth history of the Armenian Relief efforts in Australia has recently been written by Vicken Babkenian and Peter Stanley in their ground-breaking book titled “Armenia Australia & The Great War” of which many of these developments are outlined in detail. Moreover there are over 20 known badges issued by the Allied countries across the world reflecting similar fundraising efforts for the relief of the Armenian people and how badges like these were important to raise public awareness and to provide financial assistance to the suffering peoples of WWI.

Nick Pezikian started collecting at an early age. Like most young boys his age he started with collecting stamps until his early teens. His interest in stamps was reawakened when he discovered Armenia issued postage stamps during the brief period of independence from 1918 till 1923 when the country was absorbed by the U.S.S.R. This discovery led him to actively collect the imperial stamps of Armenia. During this time he wrote several articles in philatelic and community publications both in Australia and overseas, culminating in “The Bibliography of Armenian Philatelic Literature” which details over 400 citations on Armenian stamps.

In 2003, Nick started collecting badges specializing in various sports and other Australian themes. He spends several hours each week researching and collating information on his favorite categories including Rugby League Membership badges, Melbourne Cup pins and Gould League Bird Lover badges. He has published many articles in club journals, local newspapers and his catalogues are available on his web site, Victory Badges

Victory Badges was established in 2005 as a niche on-line shop for the collector of pins and badges. As a collector himself, Nick understands what a collector needs and has developed a good network of loyal customers. Currently Victory Badges has over 2000 products in stock ranging from vintage, rare items to modern collectible badges.

In early 2015 he saw a WWI badge being sold on eBay which had the word “Armenia” inscribed on it. To his amazement he found out the badge was issued as part of the Armenian Relief efforts in Australia almost 100 years ago. This chance discovery led him to write an article in the Armenian Genocide Centenary commemorative book released in Sydney, Australia. Since then he has recently published a more detailed and thorough analysis titled Australian WWI Fundraising Badges – “Servia Syria Armenia” which finally resolves the mystery of the badge.

This single badge has further inspired the author to start collecting and cataloguing Armenian Relief pins and badges issued from all over the world during WWI resulting in the forthcoming publication of The Catalogue of Armenian Relief Pins & Badges.

Nick is seeking to connect with other collectors to continually expand and improve the limited knowledge we have with these small collectible items. These badges need to be preserved and cherished by future generations as they provide tangible evidence to the relief efforts undertaken by the Allied countries during WWI and are a testimony to the truth of Armenian Genocide. His mission is to properly record these items and to continually update the catalogue with new badges and findings. Many of these pins and badges are extremely rare and information on them is even more difficult to ascertain so any assistance from collectors, historians or researchers is always welcome.