Dr. Chuck Hajinian, co-founder of the Armenian Numismatic and Antiquities Society, presented a talk on artifacts from Urartu at ACOM’s Voski Ashoun celebration. The presentation covered a brief overview of the late-bronze age Urartian state as well as the symbolism and iconography found on the silver and bronze pieces on display. All of the pieces on display were dated between 1500-900 BC. 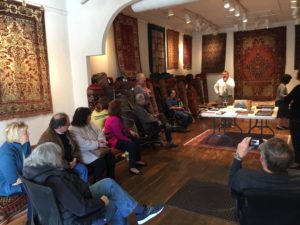 The collection included jewelry, such as a necklace made up of carnelian, bone, cowry shells and turquoise pieces dating from 11th-10th century BC. The Urartians were known for their metal work, and on display were copper bronze pieces with fine hammered out images of their zoomorphic animals and gods, dating to the 6th and 7th century BC. Speaking of gods, there was a silver plaque on display dating from early 9-8th century BC that featured the Urartian war god Khaldi, their chief god. Also on display was an array of weapons that date from 1500 BC, pre-dating Urartu.

There was much discussion during and after the talk, and we all enjoyed the wine and cheese refreshments in the atmosphere of the Keljik Rug Store. Much thanks to the Keljiks and ACOM for the hospitality.

Hajinian and Saryan are available for presentations at your organization. Send inquiries to hajinian@yahoo.com.