A. Saryan, Ph.D. and Charles A. Hajinian, DDS

In his inventory of Smpad trams, Nercessian lists just 60 examples of the coronation type[4] and provides, as does Bedoukian,[5] careful drawings of the reverse cross designs on as many examples as it was possible to visualize. Careful study of the designs published by these two authorities show numerous minor variations, but nothing that can be considered particularly unusual.

In examining our collections of Smpad coronation trams, totaling about forty coins, we have identified two examples (one from each collection) which have very unusual reverse crosses, unlike any that are illustrated in previous studies. These coins are described below:

Obverse: King Smpad wearing royal vestments seated on a throne adorned with twin lions. In his right hand the king holds a cross, and in his left a fleur-  de-lis. His crown has a distinctly oriental style, and annulets are visible in the field above the heads of each lion. Clockwise legend in Armenian   ՍՄԲԱՏ ԹԱԳԱՒՈՐ ՀԱՅՈՑ, letters Ո and Ր ligatured (Smpad King of Armenians). 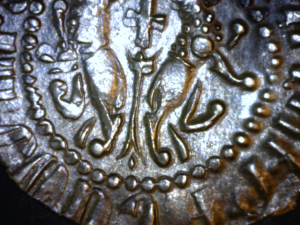 Reverse: Twin addorsed lions facing a central cross and symbol of unusual design,  composed of two elements, a cross above and a figure beneath. A  clockwise legend in Armenian reads ԿԱՐՈՂՈՒԹԲՆ ԱՍՏՈՒԾՈՅ (by the empowerment of God). 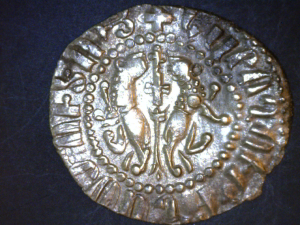 is described as having an “unusual cross”.[6]

In this paper we propose that the reverse symbol between the two lions is a composite of two depictions, a cross on the upper half, and a figure below, probably intended to represent the final ascension of Jesus Christ into heaven. Less likely, the figure could depict Christ’s resurrection and victory over death, or it could simply represent an angel.

Without too much imagination, it can be seen that this symbol located between the two reverse lions is a composite of two distinct elements. Separate from the cross, which has a short crossbar and a longer one, a figure can be seen beneath. A round head, a chest with two arms outstretched and upraised, a long narrow torso, and two short legs can be visualized. A pellet is seen between the legs. This pellet may be a symbol of an egg or life. The Egg and Dart motif was a common ancient Archeological symbol representing the cycle of life and death. The Resurrected Christ, representing life- the egg pellet. On some of the Hetoum II copper coins a tree branches out of the base of the cross. The Tree of Life motif. These kings are using symbols to communicate concepts of a religious nature.

Some parallels to this iconography can be found in contemporary Armenian manuscript illuminations produced in Cilicia. Generally, when depicting the resurrection, Armenian artists in Cilicia show Christ’s limp and lifeless body being lowered from the cross and placed in the tomb.[7] With the ascension, however, there is often a sense of upward motion conveyed by uplifted arms raised toward heaven. In the Freer Gallery in Washington, a Four Gospels of the 13th century (Freer codex 32.18) shows the Virgin, surrounded by the disciples, with her arms upraised toward Christ who is held aloft in heaven by two angels.[8] A similar scene, more carefully executed, is seen in Freer 56.11, a Four Gospels of 1263, which was written for Bishop John, the brother of King Hetoum I (1226-1270) of Cilicia.[9] In the Walters Art Gallery of Baltimore, a nearly contemporaneous Four Gospels from Cilicia dated 1262 (ms.w.539) depicts the ascension in a manner very similar to Freer 56.11.[10] A slightly less emphatic representation of the ascension, showing Christ’s arms outstretched, can be seen in the second Prince Vasak Gospel, produced in Cilicia in the last quarter of the 13th century (Ms. 2568 in the Treasury of St. James in Jerusalem).[11] In the 12th century Theodore Gospel, also from Cilicia (Ms. 1796, also in the Treasury of St. James) shows a representation of the resurrection, where the risen Christ with outstretched arms appears to the two Marys.[12]

Why Smpad would place the image of the ascended or resurrected Christ on his coins is a mystery. This would be a very bold and perhaps highly hypocritical move by someone who had just murdered and blinded his brothers Hetoum and Toros. Possibly an explanation can be sought in the historical circumstances of his day.[13]

Smpad was a usurper who took advantage of the absence of his two older brothers, Hetoum II and Toros, to take over the throne. While the two were away at the wedding of their sister Rita, to the prince of Byzantium, Smpad was able to garner the support of the Catholicos and some nobles. We do not know exactly why they supported (or even encouraged[14]) Smpad; perhaps they suspected that Hetoum and Toros were about to seal an alliance with Constantinople or with the Greek Orthodox Church.[15] When the brothers returned, Smpad was firmly in control. He had Toros strangled and Hetoum thrown into prison and blinded. Whether these acts were motivated by genuine patriotic aims such as the restoration of Armenia’s doctrinal orthodoxy and royal glory, or by a pure lust for power, there is little question that the fratricidal struggles of this era seriously weakened the country at a time when Armenia’s bloodthirsty enemies were knocking at her gates.

Smpad’s outrageous actions compelled the fourth brother, Gosdantin, to rise against him. Smpad was toppled in 1298, at almost the same time as Armenia was attacked by the Mamluks. Within a year, Hetoum, having regained his eyesight, was restored to power, and both Smpad and Gosdantin were exiled to Constantinople.

Smpad reappears after Hetoum’s murder in 1308. According to Gestes Des Chiprois, upon the murder of King Hetoum and King Levon III by the Mongol general, Smpad made another attempt to usurp the throne, this time from King Oshin.[16] Smpad approached Oshin and stated his case that since he was the oldest brother (Gosdantin having died in the interim), he should rightly be the king. Oshin called him a traitor to his country for his deeds to their brothers and offered him neither land nor crown. Smpad tried to rally his cause by a trip to Constantinople, but was intercepted by Oshin, and banished.

It is fairly apparent that Smpad saw himself, rightly or wrongly, as the savior of the Armenian kingdom. His brother Hetoum II, the lawful king when Smpad usurped the throne, was considered in some circles to be entirely too pro-Roman. Perhaps Smpad thought that his brothers were about to instigate a betrayal of the Armenian Church and the nobility. Perhaps he thought of himself as the true king and preserver of the nation and the faith.[17] If so, the image of Christ on his coronation tram would add legitimacy to his reign. In the uncertain, dangerous and extremely difficult time, this iconography would convey hope and stability, and represent the pinnacle of the Christian faith.

In any event, the iconography seen on this coin can hardly be considered accidental. And, it is worth pointing out the considerable rarity of this variety; of about forty Smpad coronation trams that we examined, just these two examples (from the same pair of dies) are found with this unusual and interesting reverse.

[2]   A single coin of this description is listed and illustrated in the sale catalog Medieval Coins XIX from the firm of Alex G. Malloy, Inc. of South Salem, NY (1982), p. 12, coin 200, and plate II. The present location of this coin is unknown and the authors have not had an opportunity to examine it.

[7] Later European-style depictions of the resurrection often show Christ with outstretched arms floating in the air above the clouds. This iconography did not become popular in Armenian art until the middle of the 17th century.   Sylvie A. Merian, “Illuminated Manuscripts and Printed Books,” in A Legacy of Armenian Treasures: Testimony to a People (Detroit: The Alex and Marie Manoogian Foundation, 2013), pp, 57, 63.

[17] On the other hand, he did not hesitate to wear, as seen on this coin, a crown with a distinctly oriental appearance, probably obtained from his Mongol allies.